The Liposomal Approach: Delivering the Goods

When it comes to the targeted delivery of the active ingredients of dietary supplements that we put into our body via our mouth, scientists are working on the most optimal way of getting these active compounds to where they need to go. This translates to areas of the body that are in distress, inflamed or in need of repair.

Up until now there have been dry powders, hard shell capsules, tablet forms, soft gel capsules, liquid concentrates, liquid extracts, effervescent powders as well as a plethora of other approaches employed to deliver supplements into our body.

Most of these encapsulation efforts focus on maintaining their contents' stability after exposure to salivary enzymes of the mouth, acid in the stomach and the enzymes and acids of the small intestine, in order to get them safely through the intestinal lining, thus allowing them to enter the bloodstream and get to where they need to go.

In the last 10 years we have been increasingly witnessing a coming together of ‘modern’ medicine/science/technology with naturopathic medicine, herbalism, Maori healing and Eastern concepts (such as Traditional Chinese Medicine and Aryuvedic practice from India).

On one side, healing approaches like naturopathic medicine are using information provided by thousands of years of recorded observation of human healing and on the other side (modern medicine), sharing a similar path, but following the scientific method to try and validate the claims made before them.

It is safe to say that most innovation in medicine now occurs at academic institutions and small biotechnology companies. Here researchers identify and map biochemical pathways that attempt to explain what is happening in molecular terms. Following this, the knowledge gained is then employed in animal models of disease and after that in humans during clinical trials that are designed to provide empirical (verified by observation not just reason or logic) evidence of what is being claimed. In these human trials, the ingredient or ‘drug’ under investigation is tested against a control ‘sham’ substance (usually in the form of a sugary pill) in order to detect if the effect is due to the actual mechanism of action of the substance or an otherwise complex psychological phenomena known as the ‘placebo effect’.

Upon closer viewing, these two fields are not really that different; both of them have at their very heart, the desire to help people heal from ills and discomfort. Practitioners of natural health are going on claims that have stood the test of time, validated by hundreds, and in some cases, thousands of years of observation, and modern medicine is trying to substantiate these claims.

Nowadays we are witnessing a renaissance of natural health and (in some cases) ancient  healing methods, mostly driven by consumers, and modern medicine is paying close attention to this. Natural substances such as chamomile, ginseng and licorice are being researched in clinical trial settings to validate claims of their stabilising effect on blood sugar levels.

Acupuncture, mindfulness based meditation, yoga positions (and yes, even yoga mats) are being investigated by modern medicine to figure out not only ‘if’, but ‘how’ these approaches work.

With both sides actively ‘borrowing’ theories, concepts and approaches from one another – medicine has employed certain ingredients that have been known to naturopaths and herbalists for generations, and in turn, natural health is borrowing active technologies from science and technology, such as novel delivery platforms.

One of these novel delivery platforms is known as liposomal encapsulation.

Liposomes, where did they come from?

Oral liposomes were first created artificially in the 1970’s – 10 years after the British scientist Alec Bangham had a serendipitous experience and discovered the existence of the lipid bilayer of the cell membrane (the outer coating of the cell) after playing around with one of Cambridge University’s first electron microscopes, taking pictures of what happened when he added a staining solution to dry phospholipids. The resulting structure resembled the outer-coating of the cell membrane.

Originally Bangham referred to his creation as “multilamellar smectic mesophases” which was a mouthful, so to his friends and colleagues he just ‘humbly’ referred to them as “Banghasomes”. It wasn’t until some years later that another colleague of his at Cambridge, Gerald Weissman, actually coined the term “liposome”.

Since the 1970’s, delivery technology has improved vastly, modern medicine has employed oral liposomes to deliver antibiotics, certain vaccines and other ingredients, that would otherwise get denatured upon contact with the stomach’s acid content and also to increase the uptake of these active ingredients into cells.

As of 2012, there were twelve drugs employing liposomal delivery approved for clinical use in the USA and five further ones are still undergoing clinical investigation.

The term liposome is from Greek and literally translates to ‘fat body’ – from “fat” (lipo), “body” (some). Liposomes mimic naturally occurring liposomal structures known as exosomes and vesicles. The natural ability of exosomes and vesicles to transport molecules between cells is a hot topic in medicine. So hot in fact that the 2013 Nobel Prize in Physiology or Medicine was presented to researchers who had described the appearance, function and role of various vesicles in humans (and also yeasts).

Most exosomes and vesicles have a lipid bilayer much like that which encircles a human cell and artificially created liposomes. What this means is that the membrane of these structures is composed of two layers of phospholipids that are inverted to each other (see diagram) a composition that artificially constructed liposomes mimic. The natural attractant/repellent properties allow these phospholipids to stay suspended in water, intact, where the outer phosphorus end (circular part) is attracted to water (hydrophilic) and the lipid tail end repels water (hydrophobic). 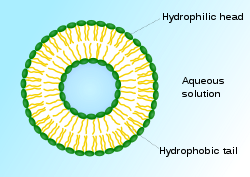 This is what keeps the structure intact, until it comes into contact with another structure that has the same properties – one just like the cell membrane.

How does the active ingredient get delivered?

What happens then is amazing, the two hydrophilic heads meet (from the liposome and from the cell membrane) and fuse – a cellular form of lovemaking if you will. Once fusion has taken place, the contents of the liposome get directly incorporated into the cell, where the active ingredient can do its magic!

These liposomes are comfortable in water because the hydrophilic (water-loving) head is pointing to the outside of the liposome and thus loves being suspended in water. When it comes to transporting the liposomes in blood, it helps that over half of the content in blood is made up of water (98% of blood plasma is comprised of water and blood plasma makes up roughly 50% of blood).

In many ways one could refer to liposomes as miniature cells, one difference to most cells in the body being that liposomes only have one ingredient and can travel throughout the human body; much like red and white blood cells, they have the ability traverse the whole body.

When cells are in distress (for instance because of the oxidative action of free radicals from the environment or bacterial/viral infections) they increase the number of receptors on the surface of their cell membranes to communicate to other cells that they are not doing too well, a cellular cry for help.

This up-regulation may ultimately increase the likelihood of liposomes interacting and binding to these newly formed receptors – hereby delivering their active ingredients more effectively.

Human breast milk is a highly complex substance, it has been studied for decades and researchers have identified over 200 different fat and water soluble ingredients. About 15 years ago researchers discovered that certain nutrients and immunologically significant molecules are not only encapsulated within lipid vesicles (liposomes) in human breast milk but also that some immune receptors are attached to the surface of these liposomes.

This means that when infants are breastfeeding, the mother’s milk contains liposomes – this was first properly portrayed with images from an electron microscope clearly showing the presence of liposome-like bodies suspended within the liquid milk.

As for other naturally occurring liposomal structures in our body, as mentioned, there are exosomes and vesicles. Both are tiny parts of the cellular infrastructure that transport various molecules/compounds to other parts of the body.

Naturally occurring liposomes are often referred to as ‘lipid vesicles’.

Natural health dates back about 5000 years to the Sumerians, who kept written recordings of their study of plants and the effects these had on alleviating the ailments of their time.

Back as far as the Ancient Greeks, doctors or rather healers, used to believe that by targeting the afflicted tissue directly, they would somehow alleviate the pain more effectively.

These ancient healers weren’t too far off the mark as it seems that nowadays, researchers are discovering that by encapsulating active ingredients in a form that mimics the outer surface of cells (liposomes) that they can actually enhance the targeted delivery of the active ingredient (e.g. liposomal Vitamin C or Magnesium) – some claim by up to 90% and that the natural appearance and action of these liposomes may increase their bioavailability by up to 800%.

(Bioavailability refers to the amount of active ingredient that reaches the body unchanged once it has been swallowed).

The future of delivery is bright!

Other natural health liposomal formulations are coming to the market, and there is real hope for the future – as this delivery technology is only going to improve with time.

Hopefully science/medicine and natural health will pay closer attention and learn from each other in the future – as collaboration is ultimately key.

That, and mutual respect! Who knows, delivery vehicles such as liposomes could be the beginning of a fusion between concepts in modern medicine/technology and other approaches to health by natural means (such as naturopathic medicine, herbalism and homeopathy), as both schools of thought have a lot to learn from each other.

So, here’s to the start of a beautiful friendship. With liposomal encapsulation paving the way.