Calm The Mind With Kava 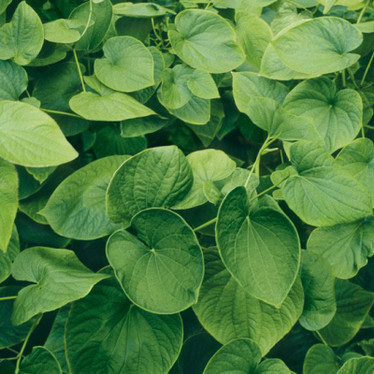 All natural, plant-based formulas are used to support and nourish the nervous system in traditional cultures all over the world.

Kava ( Piper methysticum) is widely used throughout the South Pacific for its calming and relaxing properties. The root of this plant is used to support sleep, relax the body and calm and soothe the nerves.

Kava is related to the New Zealand Kawakawa ( Piper excelsum), which shows in the signature heart-shaped leaves of both plants, however they have very different actions in the body. Curiously, although Kava produces male and female flowers on separate plants, it never fruits and can only be propagated through cuttings.

Where did Kava come from?

Kava is important in many South Pacific cultures. It has been used for health, recreationally, and as part of ceremony, for hundreds of years. Many legends surround this sacred plant, and it was so treasured that early Pacific explorers took Kava cuttings with them as they travelled. The spread of Kava is thought to have followed early migrational trade routes as far as New Zealand, where it failed to grow.

The plant was first domesticated around 3000 years ago, and it is an important part of the culture in every Pacific Island nation in which it is grown. Captain James Cook was the first to describe the ceremonial use of Kava in the Pacific to the Western world on his first voyage in 1768, which later included his first visit to New Zealand. This introduction eventually led to European use of Kava for health purposes from at least the mid-19th century.

Strong cultural practice for the use of Kava in many Pacific countries withstood efforts by colonisers to abolish Kava drinking.

How is Kava used?

For cultural use, sun-dried or fresh Kava root is crushed or ground then combined with water and/or coconut milk, which is then filtered before being consumed. In Western countries, Kava has also been extracted for health use since at least the mid-19th century using ethanol and/or water, and such extracts have been used effectively since that time when prepared from the root of an appropriate cultivar.

What are the varieties of Kava?

The two cultivars of Kava most commonly grown are “Noble” and “Tudei”. While Noble varieties are well-tolerated and contain good levels of compounds that are desired for nervous system support, the Tudei varieties contain some plant chemicals that are toxic and can cause feelings of lethargy and nausea that can last up to two days.

Traditionally, only Noble Kava varieties have been used for cultural and health-based purposes, but because the Tudei variety grows more quickly, it has found its way into the Western market as demand for Kava has increased. It is important to double-check that any products you use contain only Noble Kava.

Kava is one of the most well-researched and fast-acting plant ingredients to support feelings of worry, overwhelm, and a good night’s sleep. It has been well-researched for many years.

In lower doses it:

When you increase the dose, Kava can be used to support deep and restorative sleep:

Kava has been used in the Pacific for centuries, but you may have heard it mentioned in association with effects on the liver. When it became popular in the West in the late 1990s, concerns were raised about the possibility of ethanol Kava extracts causing liver toxicity. Until this time Kava extracts had been considered exceptionally well-tolerated. In the decade prior, 450 million doses of Kava had been taken in Germany alone, with no recorded adverse effects, so it had a very good track record.

Much research was subsequently undertaken to figure out why this plant that had been used for such a long time was suddenly causing health concerns. Reports regarding liver-toxicity have now been attributed to several different causes, including the use of inappropriate cultivars such as the Tudei variety, use of stem peelings instead of root or rhizome, inappropriate use of Kava alongside medication, or use of an acetone extract. These findings highlight the importance of using a product for which you are confident the production process has included rigorous quality control.

One of Kava’s natural properties is that it produces a slight numbing sensation in the mouth. When you try Kava, noticing this sensation is a good thing, because it means that the product contains good amounts of the kavalactones (the constituents in Kava).

Why Artemis choose to formulate with Kava

Artemis specialises in high-strength plant formulas based on traditional remedies which are backed by science. Kava has a long track record of traditional use underpinned by positive scientific studies, and provides fast-acting, effective nervous system and sleep support, without any unpleasant ‘morning-after‘ feeling.

A lower dose of Kava is calming and assists relaxation without making you sleepy . It can provide fast support for busy parents, students, and anyone under stress.  Artemis De-Stress Spray is designed to be easily carried and used throughout the day as the need arises.

For a greater calming effect to support sleep by soothing racing thoughts, relaxing muscle tension and easing worry, Kava can be taken in a higher dose. With its higher Kava content,  Artemis Deep Sleep provides effective support for restful sleep and a healthy sleep routine.

As discussed, it is very important to make sure the Kava in the product you are using is derived only from Noble Kava root or rhizome.  Artemis follows stringent quality standards to ensure the De-Stress and Deep Sleep Kava products are effective and well tolerated.

While traditionally prepared Kava has an excellent profile for use, not all products are suitable for everyone and we recommend the Artemis Kava products De-Stress and Deep Sleep only for children over the age of 12.

At a higher dose of Kava, such as that in the Deep Sleep, we recommend checking with your healthcare practitioner first if you are taking sedative or dopaminergic medication. Additionally, as safety data is limited in this dose for people who are pregnant or breastfeeding, we recommend that you seek advice from a healthcare practitioner first, or try Artemis Deep Sleep Tea.

Always read the label and use as directed. If symptoms persist see your healthcare professional.
Artemis Ltd, Dunedin.