What’s the Fuss About Bone Broth? 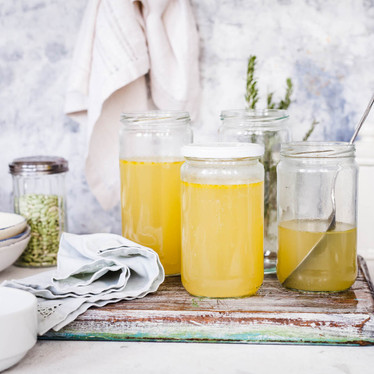 For the last few years, the popularity of paleo and primal lifestyles as well as people exploring the GAPS diet, has seen an increase in the addition of bone broth to diets. However, using bones as a base for cooking has been normal behaviour for many traditional cultures, who believed in using all parts of the animal. Bone broth, or stock, is made by cooking bones for lengthy periods in water to extract the nutritional elements from the bones and joints.

What nutrients are found in bone broth?

There are many minerals in a well-made stock.

These nutritional substances help to thicken and congeal the stock once it has cooled. The nutritional content of broth will vary based on the bones used, cooking time, and method.

How do I make it?

Using bones from meat eaten during meals, add to a slow cooker with plenty of water to cover the bones. For example, per 1 kg of bones, add about 3 litres of water. The water should cover the bones well. Another option is to purchase bones from the butcher, but in order to get the best flavour, it is best to cook these dry first, as you would a roast.

Heat slowly until it is boiling and then reduce the heat until it is just simmering. Adding a small amount of vinegar to the stock can be useful to help extract calcium from the bones.

If you are making a broth from fish, it will only take a few hours. Birds like chicken should be simmered for about 12 hours and lamb or beef for about 24 hours. Ideally use bones from animals that have had a good healthy life and fair treatment. If they are mal-nourished, or carry heavy metal burden, that will reflect in the broth made.

A good practice is to skim the scum that rises from the top, and then once it is cool, strain the broth and freeze in air tight containers. Broth can be kept in the fridge for a few days.

Bone broth can be consumed on its own, or as a base for most meals or sauces. Use it as a replacement to water in most savoury recipes. Broth adds flavour as well as essential nutritional components that are missing from the modern diet.

How can bone broth support me?

Because of the components that are commonly contained in bone broth, this nourishing food can support many parts of the body, here’s a few examples:

If you’re not quite ready to make bone broth, then you can purchase it. At HealthPost we stock a great option: Nutra Organics Beef Bone Broths which are naturally nourising and rich in easily absorbable vitamins and minerals to repair bone and joints. Great to support gut health and immunity, helping you feel good inside and out. They are available in the following flavours: Turmeric, Garden Herb and Hearty Original.