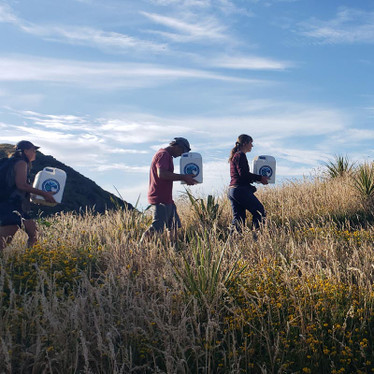 Volunteers take the taonga to the hut to be blessed and given a health check before the mihi whakatau welcome ceremony by Manawhenua kī Mōhua.

The eagerly anticipated translocation of the first 50 pakahā fluttering shearwater chicks to the Wharariki Ecosanctuary happened without a hitch on Saturday 15 January 2022.

Blue sky and little wind helped everything go to plan - from the collection of the chicks at Long Island in the Kokomohua Marine reserve in Queen Charlotte Sound to their new home at Cape Farewell, at the top of the South Island.

It is what the last four years of planning, fencing, trapping, planting, and making of burrows have all been for – to reintroduce fluttering shearwater and other native species to the mainland where they can flourish in the predator-free habitat.

“One of the main aims of the Wharariki Ecosanctuary and the HealthPost Nature Trust is to increase community and visitor engagement with the important conservation values of the Wharariki-Onetahua area,” said Lucy Butler, HealthPost Executive Director and Sustainability Lead.

Left to right: Pakahā gets its first sight of its predator-free home in the Wharariki Ecosanctuary. Dr Chris Wheatley and Peter Butler (left) listen as Barney Thomas Chair of Manawhenua kī Mōhua explains the mihi whakatau process and calls for 25 volunteers to bring the birds from the vehicles up to the hut for a health check and blessing.

Over the years, mammal predators have decimated pakahā populations on the mainland, to the point that their breeding colonies are now mostly found on offshore islands. Bringing our taonga back to the mainland and restoring the coastal ecosystem to what it was before is the ambitious goal of this project spearheaded by HealthPost's Peter Butler.

“It's a big deal for us, and it’s nice to be able to do something absolutely positive,” said Peter Butler. “The beauty of this place is that it is a sea cliff with that really rich ocean right there. It would have been covered with birds back in the day. This is great ground for them to naturally colonise as it is quite sandy. The idea is eventually they’ll overflow from the predator-free area. Then, as we get the predators controlled in the hinterland and there’s an overflow over the fence, we’ll have really created something long term and collectively.”

From Kokomohua to Cape Farewell

The 50 pakahā chicks are the first birds to be translocated by the HealthPost Nature Trust in partnership with the Department of Conservation (DOC) and Manawhenua kī Mōhua, which represents Ngāti Tama, Te Ātiawa and Ngāti Rārua in Mōhua Golden Bay.

Because of the short window from when they’re old enough to be translocated to when they leave their burrows the birds were chosen by their wing length and weight.

“Our preference is for chicks that are two to three weeks away from when they would naturally fledge from their natal burrows on Kokomohua Island,” said ecological adviser Tamsin Ward-Smith, of Wild Solutions, who advised the HealthPost Nature Trust on the best site for the Ecosanctuary.

Many seabirds, such as pakahā, are site faithful and usually return to where they fledge to breed, which can make it difficult to establish new colonies.

“By selecting chicks that have not emerged from their natural burrows, we can translocate them to a new predator-safe site like this at Cape Farewell and hope that they will imprint as this being their new home when they take their first peek of the world. They may use a number of cues such as the landform, wind, stars, and smell,” said Tamsin.

Ursula Passl, Pou Ārahi (manager) for Manawhenua kī Mōhua, explained that as the birds came from Kokomohua –which is a Te Ātiawa island - it was a simple bringing of the taonga (treasured) species to Te Onetahua (Farewell Spit and surrounding area) within the same tribe.

“The ahika are people that live here in the Bay and support and awhi (cherish) and welcome the return of a taonga,” said Ursula. “Coming to Manawhenua kī Mōhua rohe (area of land), which is their territory or takiwā, then it’s the kaitiaki (guardian) that come to do the mihi whakatau (welcome ceremony) led by Manawhenua kī Mōhua Chair Barney Thomas.

“It’s a very big transfer of the responsibility to look after a taonga. If the taonga came from Taranaki then it would be a different ceremony process, as it’s another tribe. Whereas this is the same tribe, just a different whanau.

“HealthPost initiated this process with the manu (bird) transferal, but we’ve been also working with DOC to discuss the way of doing it and how to do it. Everyone’s holding a part of the transferal to make it a success,” said Ursula.

Strength in collaboration and collective effort

Creating an Ecosanctuary with species translocations is no simple undertaking. It involves considerable collaboration, planning, preparation and approvals with DOC and iwi, while working with teams of experts and volunteers.

Former Forest and Bird Regional Manager for the top of the South Island, Debs Martin, first joined the project to coordinate a collective scientific BioBlitz of the Wharariki area in 2019.

“What’s been achieved here is big,” she said. “It’s a sign of this project and the great communicators - the people who know that you need to bring in others to get it to happen. To see the strength and diversity of the community that made this happen as well is really cool.”

"Other wins like, when I drive through, I don’t see bulls in the paddock. The wetlands are better protected and all the planting that’s going on. Just the people talking about what’s happening here, and the engagement with iwi is awesome - keeping in contact with Manawhenua kī Mōhua, making sure that they’re well involved. It shows the strength in that relationship, to have and hold that relationship and trust, is really important,” said Debs.

Dr Chris Wheatley, HealthPost Nature Trust Trustee and Project Manager of the wider Onetahua Restoration Project, agrees. He said, “It’s exciting to see all the effort that’s gone into the fencing and the predator control start to bear some fruit. It’s important to do, not only because we don’t have the fluttering shearwater nesting on the mainland here, but it’s also a way of upskilling a network of volunteers and is something we can build on in the future,” he said.

Years at sea before birds return to breed

After they fledge, the pakahā will spend several years at sea before they return home to the colony to breed.

"Our big hope is that they'll come back and maybe bring a friend or two. But that will not happen until they're three, four or five years old, perhaps even six years old, so you have to play the long game with this," said HealthPost project co-ordinator Marian Milne who coordinates the volunteers.

The Trust aims to translocate a total of 250 fluttering shearwater chicks to the Ecosanctuary by 2024. “50 chicks this year, then 100 each in the two subsequent years,” said Peter. “We also hope this April we may introduce some flesh-footed shearwater (Toanui) from Taranaki. But it depends, as it’s quite a lot to do two reintroductions in one season.”

Asked if he would have undertaken such a project had he known how much was involved, Peter Butler replied without hesitation. “Oh yes, it’s incredibly rewarding. Also, you’re building a skill base. So, it’s not just a one off, it’s the first one,” he said.

“Businesses have an important responsibility to their community and surrounding environment. We have a saying here that the health of an individual is hugely influenced by the health of their environment and community. It’s brilliant to see our community of like-minded businesses, volunteers, and individuals come together to support this project. For a long time we’ve all been laying the foundation – fencing and trapping, and to now see the impact of this through reintroducing species is incredibly rewarding, humbling, and life-affirming,” said Peter.

Lucy Butler emerges from the hut after carefully carrying one of the boxes with two pakahā into the sanctuary.

“This our first translocation and an important milestone for HealthPost’s sustainability journey. It‘s great to be working in and with community to deliver on our vision to have a lasting positive impact on the wellbeing of people and the planet,” said Lucy.

“It’s wonderful to see how excited people are about bringing these taonga back to the mainland, and the increased engagement in conservation we’ve seen as a result.

“It’s been a collective effort and wouldn’t have been possible without the support of so many - from our volunteers here on the ground to the many contributions from national conservation experts, and the vital support of iwi in guiding this process. We’re feeling really supported to continue working collaboratively to restore biodiversity here in Mōhua Golden Bay.”

An inner fence provides added protection for the 50 burrows built by volunteers for the birds at the Wharariki Ecosanctuary.