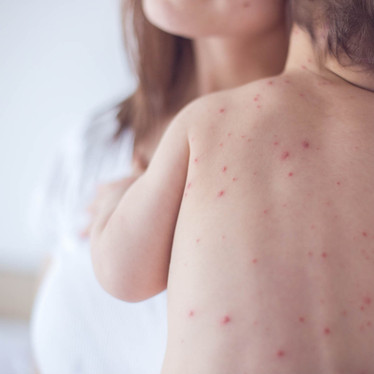 Would you go to a chicken pox party? It’s a question I have pondered myself. Chicken pox parties used to be a regular occurrence and were even promoted by GPs. Common understanding was that children hadn’t really experienced childhood until they had a dose of the pox, which was considered to provide a lifelong immunity against future chicken pox infection. The traditional wisdom was that chicken pox is a normal childhood illness that boosts immunity and protects from outbreaks later on in life when risk of complication is increased. At the time pox parties were a rather elegant way of providing immunity for the majority of children and adults.

Now that a vaccine for chicken pox has been developed the popularity of Pox Parties has waned, in some parts of the world pox parties have even become criminalised, with people being prosecuted for hosting them. Despite this there are still pox parties occurring and even facebook pages dedicated to finding a pox party near you or people willing to exchange pox infected lollipops via our postal system. (note: This is not a reliable way of sharing the disease as the virus does not last long outside of the human host and transmits best when inhaled)

Chicken pox (caused by the Varicella zoster virus), is a reasonably common childhood illness that causes fever, malaise and a blistering rash. Unless whoever has it is immunocompromised or has other underlying issues it is generally easily managed and if treated correctly shouldn’t cause complication. Severe complications occur in less than 1% of people who have contracted chicken pox.(5)  Complications are not common but when they do occur they include pneumonia and bleeding issues, the most common complication however is the occurrence of resistant staph bacteria which results in skin infection and possible encephalitis. Once contracted, the varicella virus lives permanently in the nerves of the body and shows up later in adult life as a shingles infection. Shingles is a more serious condition that can result in hospitalisation and and further complications.

So are pox parties a good idea? That’s hard to know. Whether you prefer to vaccinate or prefer the naturally gained immunity of chicken pox there are risks involved. As a parent it's difficult know which is the best course of action to take.  Many parents are now opting for the varicella vaccine because it’s promoted as a safer option and it solves the issue of taking time off of work to look after sick children. However there is little data to show that vaccine gained immunity for the Varicella vaccine lasts for a significant period of time, with immunity levels decreasing even after the first year  and no consistent figures on immunity after 5 years or more.(3)  This raises questions about people having immunity in their formative years but becoming at risk of infection when they are more vulnerable in their adult years. Choosing the vaccine may put you at risk later on, unless you remember to take regular booster shots.

People who have opted out of the varicella vaccine for ethical or medical reasons may see a chicken pox party as a legitimate way of gaining immunity that is consistently protective and lasts a long time.  The tricky part to this is that even if Chicken pox is seen as relatively harmless, it is still taking an active step to make your children ill, and this can be ethically tricky for some people.  It also raises concern about herd immunity. People who choose between vaccinating or a pox party are often balancing the choice between the convenience of avoiding multiple days off of work to care for a sick child versus the benefits  of offering a stronger immunity at the cost of dealing with sick children. What happens if your child doesn’t get sick at all? With levels of chicken pox theoretically reducing in the community, chances of exposure reduce. There is also a theory that circulating levels of chicken pox in the community actually boost immunity in adults on an ongoing basis and thus reduce instances of shingles, meaning that having circulating chicken pox may actually be beneficial.(3)  There have been studies which indicate shingles cases are on the rise now that varicella vaccine levels are increasing.(2)

If you do decide to opt for a chicken pox party it’s important to do so wisely. Be prepared to manage the outcome, don’t do it if you or your children are immunocompromised in any way and make sure you communicate with people to ensure you don’t infect anyone unwittingly. Knowing you or your children are potentially contagious actually provides an opportunity to protect the community by staying at home before the disease presents. It also allows you to pre-emptively support your child’s immune system and prepare for the illness. Chicken pox can take 3 weeks to appear and is contagious 2-3 days before becoming symptomatic so knowing the exact date of potential infection can be a boon to managing any unplanned outbreaks. This is especially pertinent to households with pregnant women in them.

Parents who decide to vaccinate also need to be aware of contagion as the varicella vaccine is live and has been known to ‘shed’ or infect people exposed to a recently vaccinated person.(4)  It’s important to avoid getting the vaccine during pregnancy and ensure no one in the household of a pregnant woman is vaccinated, especially in the first trimester. This is because varicella has been associated with birth defects. It is also important to get regular booster shots and a possible shingles vaccine in later life.

I had never had Chicken pox as a child and I was exposed whilst I was pregnant, which caused a lot of concern for my GP. I wish I had been exposed as a child as it would have made things simpler for me. Luckily I did not contract the disease at the time, although the whole family caught it naturally without intervention a few months ago. It was managed well and proved to be pretty mild and easy to deal with. No party for us; I’m glad I didn’t have to make that decision.

So would you consider a pox party?

Natural Mum on the Cheap

Thompson’s Junior Immunofort provides a comprehensive immune boosting formula specifically for children 2-10 years old, especially ‘picky’ eaters who refuse their fruit and vegetables! It is available for secure order from our online shop.

Would you consider taking your kids to, or hosting, a Chicken Pox Party?

Or would you rather get them vaccinated?