Getting Started With Seaweed: The Oceans’ Superfood 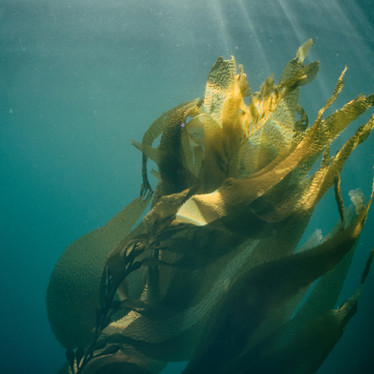 Seaweed has been eaten for centuries, particularly by coastal populations, and Asian communities have continued to eat seaweed as a key ingredient in their diets. Recently, however we are seeing a revival of these superfoods as the rise of plant-based nutrition gathers momentum and consumers look for more nutrient-dense foods.

You’re familiar with seaweed in sushi, but this superfood's nutritional value and delicious flavour combinations have so much more to offer. Let’s chat about what makes seaweed so special and easy everyday swaps, so you can introduce seaweed into your day. Before you know it, this unsung hero will be part of every meal (you can thank us later).

Why is seaweed important for the health of our planet?

Seaweed isn’t technically a plant but rather marine algae. There are thousands of seaweed species around the world, and each grows at particular latitudes as well as different depths in the ocean. All seaweed contains chlorophyll and therefore photosynthesize, absorbing carbon dioxide and releasing oxygen into the atmosphere. It is claimed that up to 85% of the planet’s oxygen is produced by micro and macro algae present the oceans. Pretty cool, right?

As the base of the oceans’ ecosystem, seaweed provides food and habitat for a number of small creatures and performs essential cooling, neutralising and cleansing functions in the waters where they grow. When seaweeds are farmed as a crop they require neither additional water nor fertiliser to grow making them a carbon negative food source. Many ( like us) hail seaweeds as the food of the future.

Seaweed can be categorised into three main colour groups – greens, browns and reds. Greens (such as Sea Lettuce) grow in shallower waters, browns (like Kelp, Kombu and Sea Spaghetti) grow in the middle depths and red seaweeds (such as Nori, Dulse, Irish Moss and Agar), in the deeper waters. Each colour group offers different nutritional value: greens tend to offer more chlorophyll and iron, browns offer a much richer iodine content whilst reds tend to have a relatively higher percent of plant protein relative to other colours. We encourage ‘eating the seaweed rainbow’, to ensure a range of nutrients and minerals can be enjoyed.

Seaweed is the basis of the ecosystem of our oceans. Our oceans contain an abundance of different minerals and trace elements which might not be present naturally in soils. Seaweeds are very efficient at absorbing these nutrients, and as a result are one of the most nutrient-dense foods on earth.

Seaweed contains many concentrated and bioavailable minerals, trace elements, vitamins, enzymes, antioxidants and omega-3 and -6 fatty acids. Generally, they offer a complete, fat-free protein, which is relatively easy to digest. They are widely regarded as the best natural source of iodine, which can be lacking in Western diets. What is lesser known is the extent and range of other nutrients, minerals and trace elements they offer such as magnesium and calcium.

This mineral offering varies by species in much the same way that a carrot and parsnip offer different nutrients although they are both root vegetables. For example, Sea Lettuce offers a source of iron so makes an excellent garnish for anyone struggling with low iron. Nori (also known as Karengo in New Zealand) offers a source of Vitamin B12, which is difficult to find from a plant protein, so may be regarded as a pantry staple to support vegans and vegetarians.

A World of Flavour

Although kale and broccoli are both green vegetables, they have a different flavour and texture. In the same vein, Dulse and Nori are both red seaweeds but they have extremely different flavours. Dulse is known as the ‘vegan bacon’ due to its naturally smoky flavour (which intensifies if you heat it), whilst Nori can take on the flavour of anchovy in a tomato-based sauce but can resemble a similar flavour to mushrooms when roasted.

Broadly, seaweeds offer umami flavour and are naturally salty so make an excellent choice for those following a low sodium diet. The white powder you may see on a dried seaweed leaf is in fact an amino acid called glutamine and this is what provides seaweed’s rich, umami flavour. In fact, it was this very powder the Japanese scientist who created MSG in the 1920’s was attempting to replicate in his lab.

Getting started with Seaweed

A little goes a long way with seaweed due to its nutrient density. Pay attention to the serving size on the pack to make sure you follow an appropriate level of iodine intake that's suitable for you.

It is easy to incorporate seaweed in your every-day diet with these 8 easy swaps:

Pacific Harvest is a New Zealand company which specialises in the supply of a range of ethically harvested, food grade seaweeds that have been tested to comply with Australian and New Zealand Food safety requirements. Many seaweeds are offered raw and some innovative seasoning products are blended locally to make it easy to embrace seaweeds in everyday cooking. Pacific Harvest is recognised as a Mindful Brand for their supply chain and ingredient sourcing transparency.

Note: All seaweeds offer a source of iodine however brown seaweeds have a particularly high iodine content so please ensure you pay attention to the serving sizes on the reverse of the pack if you have thyroid sensitivities. Please note the nutritional content of seaweeds can vary depending on where, and how they are harvested and dried. Always buy seaweeds which have been tested for contaminants and ethically harvested.