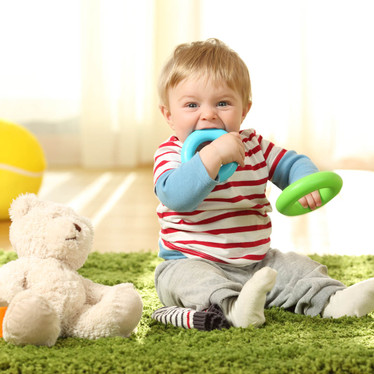 When children come down with their first fever and show signs of irritability the reason will soon emerge – with the arrival of their first tooth! It must travel a long way through the jaw and may take many weeks or months before finally coming through.

Teething is the process by which an infant's first teeth (deciduous or milk teeth) sequentially appear by emerging through the gums, typically arriving in pairs. It can happen from as early as four months, but most commonly from six to eight months of age. Teething pain is not an illness, but getting teeth marks the next major step in a child’s separation from their mother. At this stage, mother’s milk should be complemented by solid food such as porridge and first fruits that the child can mash with their first teeth.

It’s not by chance that teething pain often occurs when children are in the process of testing their own physical range of movement. First teeth usually come out when a baby starts to crawl. By the time they learn to walk at about 15 months of age, toddlers have eight teeth on average. The first phase of autonomy generally begins once all of the baby teeth have arrived, at about two years of age.

Babies experiencing teething generally dribble more, put objects in their mouth, have red cheeks and can even be very distressed. Swelling or red gums can also indicate teething pain.

Teething can lead children to become more prone to colds, cough and fever. Sometimes the other end of the digestive system also reacts to the change, in the form of nappy rash.

Teething, along with gastrointestinal infection that unfavourably changes the gut flora, or digestion of first acidic fruits can cause nappy rash. Surprisingly, the delicate skin of a baby’s bottom can withstand a lot and is not easily irritated by short-term contact with urine and faeces. However, if an inflammatory rash does occur, with redness, sores or even bleeding, the bottom should be exposed to fresh air as much as possible, enabling the affected area to heal. A nappy cream also helps the skin to regenerate and prevents itching. Changing the kind of nappy worn may also help.

Give your baby something cool and firm to chew on, helping to numb the gums and reduce pain, such as a cooled apple wedge, a clean frozen washcloth, or a teething ring kept in the fridge.

While teething may increase stool acidity and contribute to nappy rash so can dietary factors (for example, eating large quantities of stone fruit or other acidic foods). Address nappy rash quickly, as blisters and ulcers can easily form, escalating the level of pain and distress.  To relieve itching and pain, and encourage healing, use a natural cream containing gentle healing herbs such as calendula, chamomile, aloe vera and lavender oil.

For centuries, chamomile (Matricaria recutita) has been treasured in Europe for its ability to ease tension, soothe digestion and reduce inflammation. This annual herb comes from the daisy (Asteracea) family and produces tiny delicate white flowers with yellow centres. To ease the discomfort of teething the root of the chamomile plant can be given as a homeopathic preparation. This helps to reduce the pain and inflammation where the tooth is pushing through the gum. Chamomille can also help to effectively relieve common symptoms associated with teething such as irritability, digestive upsets and red cheeks. Working with the body in a gentle sympathetic way, chamomile can relax mind and body and help prepare for a good night’s sleep, so it makes an ideal ingredient for infant remedies!

Another traditional ingredient used can be conchae, a natural form of calcium carbonate sourced from the oyster shell. This remedy is often combined with chamomile as it helps to soothe teethingaches and pains and exhibits calming properties.

Weleda Baby Teething Powder contains a combination of chamomilla root and conchae and is one of Weleda’s best-selling products. Made in New Zealand, Baby Teething Powder is for the relief of the discomfort and restlessness of teething in babies and children, and helps calm and soothe. Shop online on our secure online store.

Always read the label and use as directed. If symptoms persist see your healthcare professional. Weleda, Havelock North.
TAPS PP2698