The background on beetroot 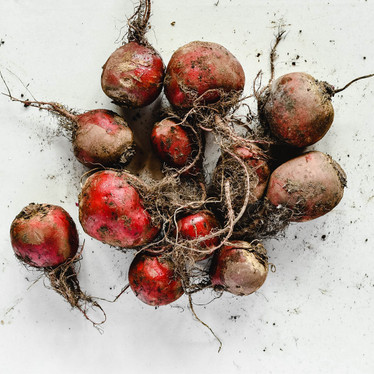 Ancient Greeks first farmed the common beetroot around 300 BC. They didn't use the roots of the plant and only ate the leaves. The Greeks also considered the Beetroot to be worth its weight in silver and offered it to the sun god Apollo in the temple of Delphi to grant them wealth. Back then the root was long and thin like a modern day carrot.

Hippocrates (460 – 370 BC) used the cherished leaves of beetroot for binding and dressing wounds while The Talmud (very early Rabbinic Judaism text) written in the 4th and 5th century, suggested eating beetroot, among other things, for longevity. Romans did eat the roots but mainly for medicinal purposes. They consumed the roots as a laxative and/or to cure fevers. There were some that used Beetroot as pleasurable food: Apicius, a famous collection of every early Roman cooking texts, gave recipes with beetroots like broths and salads with mustard, oil, and vinegar – not too far away from modern day dishes we like to enjoy.

The modern bulbous root as we know it today did not appear until the 16th and 17th centuries in as a new variety in Europe where it became a very popular ingredient in dishes such as Borscht from the Ukraine. During this time folk doctors were focussed on the ability of Beetroot to help pale and weak individuals convalesce after serious illnesses. After the First and Second world wars people had to get used to getting by and preserving their vegetables and pickled beetroot became very popular.

It is pickled beetroot that many of us remember from our school days, with a shudder or fondly. Most of us associate beetroot with its hamburger partner, alongside onion, lettuce and mustard. Beetroot can be sliced or grated into salads, boiled, roasted, steamed, mashed, pickled and eaten hot or cold, cooked or raw. You can even use Beetroot in sweet baking dishes like Red Velvet cakes. These days we can find the traditional pink beetroot, as well as white and orange and even yellow ones.

Many complain that beetroots have an “earthy” taste and smell, which isn’t far off the mark. Beetroot contains a substance called geosmin, which is responsible for that fresh soil scent in your garden following a light shower of rain. Humans are quite sensitive to geosmin, even in very low doses, which is why some people adore the sweet and earthy flavour, while others can’t stand it.

The sweetness of beetroot is also well known, and it can easily be used for many sweet recipes. The vegetable has been associated in many cultures with love; it is said if a man and a woman eat from the same sweet beetroot, they will fall in love. Back in ancient Roman and Greek times the red beetroots were hung on the walls of the brothels as a symbol of lust. Paintings have been found of beetroots decorating the walls of brothels in Pompeii. In Greek Mythology Aphrodite the goddess of love ate Beetroot to enhance her appeal to men.

Maybe those Romans and Greeks were on to something as Beetroots are actually a great natural source of tryptophan and betaine both of which promote a feeling of well-being. In addition Beetroot is full of boron, a trace mineral which can increase the level of sex hormones in humans.

So next time you walk past the red bunch of beetroot at your local store- stop for a moment to think about how you might add them into your diet to enjoy some of the plant based benefits that have made beetroot a prized food for millenia.