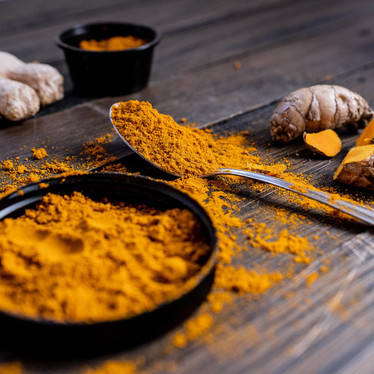 There really is nothing better than a lovely hot curry to warm your soul on a cool autumn night.  Although there are many spices that contribute to that tell-tale Indian curry flavour- there is only one that contributes that warm rich golden colour and that is turmeric.  Indigenous to India and South East Asia, turmeric (Curcuma longa) has been used as both a culinary spice and a colouring agent for all manner of goods for around 7000 years.  Aside from imparting a slight peppery earthy flavour and a vibrant hue to a variety of dishes, turmeric has also been used extensively as a traditional medicine.

Ancient Ayurvedic texts discuss the warming, pungent and bitter nature of turmeric (Curcuma longa) for supporting the liver, lungs, skin and heart.  In both Hinduism and Buddhism, turmeric is linked to fertility and luck and it is also used to add a glow to the skin of Indian brides. “Haldi doodh” or turmeric milk is the traditional way (aside from curries) to get the many benefits of turmeric. Often blended with other spices such as ginger and cardamom, this golden milk is predominantly employed as a sore throat remedy, immune support and winter warmer.  However this golden elixir is also thought to help dampen inflammation, support the immune system, a happy mood and even to support a healthy sleep.

Turmeric (Curcuma longa) is a member of the Zingiberaceae family which is also the same family from which ginger comes. Turmeric rhizome contains a large range of components including essential oils, polysaccharides and compounds called curcuminoids which not only give turmeric its colour, but from what modern studies suggest, are responsible for much of its therapeutic activity.

The numerous compounds in turmeric have antioxidant actions, acting to neutralize free radicals while also supporting the livers production of its natural antioxidant compounds.  This makes turmeric the perfect product for anyone wanting to protect against oxidative stress and the degenerative diseases that may come as we age.

Turmeric also has antimicrobial and immune supporting actions making it great for keeping winter ills at bay. Turmeric is also thought to dampen inflammation in the gut, support and protect healthy liver function and bile flow, healthy gut flora and support the health of the gastrointestinal mucous membranes. Perfect for any type of gut or digestive malady.

Another area where turmeric has significant benefits is in supporting comfort in inflammatory conditions.  Clinical data shows that turmeric can have an anti-inflammatory effect via not one but two different pathways, without producing the gastrointestinal side effects often seen with OTC products.

So whether you get your daily turmeric fix in a curry, as a turmeric latte, mixed in your porridge, as a tea or shot or as a tablet, you can rest assured that you have thousands of years of traditional usage backing up your favourite spice!

Radiance produce a number of Turmeric based products including Turmeric Latte Powder, Organic Turmeric Tablets and Turmeric Plus Liquid.  Buy them now from our secure online shop.

Have you tried a Turmeric supplement before?