Be Happy and Whistle: Your Liver’s on Milk Thistle 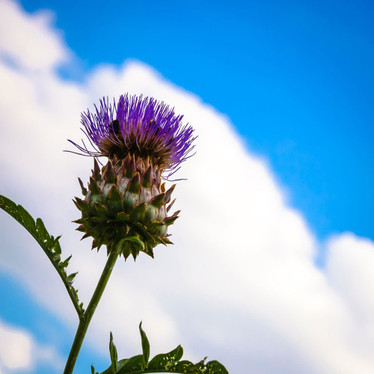 When it comes to the natural treatment of liver diseases, there is no plant on Earth that has been studied more extensively than Silybum marianum – also known as the humble milk thistle. It has been used for over 2000 years to treat liver, kidney and bladder problems. Wind the clocks forward and milk thistle’s primary active ingredients, mainly the flavonoid silymarin, has been scientifically proven to protect the liver from oxidative stress and injury through toxins.

Milk thistle can grow up to a whopping 3 metres in height! Most parts of the plant are edible, including the leaves, the seeds and the flowers. The leaves are very tasty and people have compared them to artichoke leaves. The beneficial flavonoid silymarin is found almost exclusively in the seeds, which can be roasted and boiled like coffee.

Milk thistle protects the liver from many types of damage

Not only does milk thistle actively protect the liver, it also helps with the regeneration of damaged liver tissue, decreasing damaging inflammatory effects on the liver, lowering bile and liver cholesterol as well as decreasing negative effects from liver cells affected by decreased oxygenation.

Silymarin has been shown to have the ability to actively block toxins from entering hepatocytes (liver cells) by preventing them from binding to the cell membrane of hepatocytes.

Several trials have studied the effects of milk thistle in patients with hepatitis C, fatty liver diseases, cancer, HIV, diabetes, and hypercholesterolemia, all with very promising results. It has been evaluated extensively in clinical trials over the past 5 years including basic biochemical analyses (pharmacokinetic profiles and toxicity studies), other herb-drug interaction studies, and a plethora of other safety issues.

Treatment with silymarin exhibited significant benefits, in clinical trials of human subjects who had experienced liver damage caused by alcoholism and/or hepatitis.

In animal studies, milk thistle has been shown to significantly reduce bile cholesterol in rats. In other animal models, silymarin was also shown to have beneficial immunomodulatory effects – which were also witnessed when it was applied topically as a salve to mice with dermatitis.

Milk thistle's fervent anti-inflammatory activity is so unique, that it is now even being studied extensively in animal models of Alzheimer’s and other neurological conditions associated with inflammation.

Silymarin: A flavonoid with a difference

Silymarin, the active ingredient in milk thistle, is a compound extracted from the seeds. Silymarin belongs to a group of flavonoids (silicristin, silibinin and silidianin), believed to help liver cells repair after damage by pollutants, alcohol and other toxins.

Additionally, it also prevents new liver cells from being denatured by toxins. Silymarin is a strong antioxidant and as mentioned, reduces inflammation. It has also been implicated in helping the liver to promote the growth of new hepatocytes.

How much to use and when?

Well, they say everyone is different, and when it comes to the liver, this statement becomes doubly true as we all have very different livers that are exposed to different toxins and environmental pollutants depending on your post code, your diet, your alcohol intake as well as your exercise regime.

But in saying this, there are certain standards that are adhered to by all health professionals.

Most standard preparations of the extract of the milk thistle seed contain approximately 80% silymarin flavonoids (silybin, silydianin, and silychristin).

The typical dosage recommendations regarding milk thistle supplements for adults are 175 mg of 80% silymarin extract. Usually it is advised to take the preparation 1-3 times per day – usually with food. Please consult a health professional if you think you are experiencing liver, kidney or bladder problems. Milk thistle is safe when taken as a supplement. There have been no known reports of toxicity or drug interactions following supplementation with milk thistle and/or any of its related compounds.

Have you ever used milk thistle to treat a health complication? If so, what were the results? Thanks for sharing your experience with us.