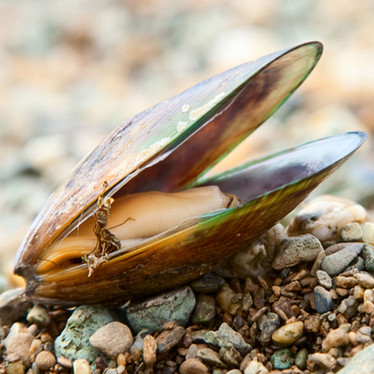 Endemic to New Zealand coastlines, the green lipped mussel is an amazing creature. During its lifetime, it goes through some pretty incredible changes. It spends the first six weeks of its life as a free-swimming larva (a very long time compared to other shellfish) and then transitions into the hard shelled spat that anchors itself to one spot for the rest of its life. Remarkably some green lipped mussels have been observed to live up to 5 years!

Over 150 years ago, Maori healers touted the green lipped mussel as a natural treatment for anyone with swollen limbs or pain in their joints. Traditionally they consumed this shellfish by cooking it first in Earth ovens, but when it was used medicinally the mussels were either consumed raw or they were dried in the sun and partially pulverised and mixed with water.

Like many of their traditional healing procedures, Maori healers were pretty spot on with their intuition regarding green lipped mussels in treating joint related problems and arthritis-like conditions.

When a joint becomes infected, it is known as septic arthritis.

The main complaint by people who have arthritis, is joint pain. The pain is often a constant and may be localized to the affected joint. The pain from arthritis is due to inflammation that occurs around and in the joint, joint damage from previous disease, ‘wear and tear' of joint by daily activity, and also muscle strains caused by forceful movement against stiff and painful joints.

In the last ten years there have been numerous toxicology, preclinical and clinical assessments of green lipped mussel extract in treating various conditions, including rheumatoid arthritis, osteoarthritis and other joint diseases. These trials have been conducted all over the world with very positive findings.

In one of the most recent trials, 30% of people with painful arthritis in their joints experienced pain relief and a marginal increase in joint flexibility as well as a reduction in overall stiffness of the afflicted joints.

Green lipped mussels are a great source of an essential fatty acid called eicosatetraenoic acid (ETA). This fatty acid is is an intermediate compound in the conversion of stearidonic acid to eicosapentainoic acid (EPA) (one of two Omega 3 fatty acids).

According to recent biochemical analyses, ETA  also appears to act as a potent inhibitor of arachidonic acid oxygenation – a major cause for inflammation in arthritis. Another reason green lipped mussels are so effective in treating joint conditions.

Omega-3 fatty acids have been shown to reduce the amounts of certain proteins that are important in the pathology of arthritis.

Krill oil and fish oil are both good sources of omega-3-fatty acids.

Have you ever used milk thistle to treat a health complication? If so, what were the results? Thanks for sharing your experience with us.