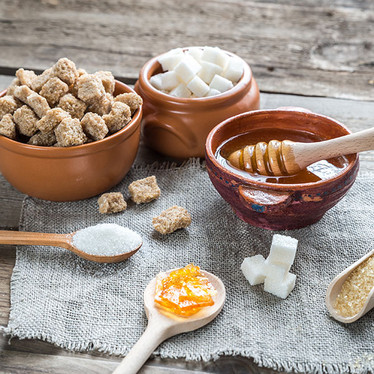 White sugar is highly refined and doesn’t contain any vitamins and minerals – it’s essentially empty kilojoules! If we’re looking reduce the amount of sugar we eat in our diet, are artificial sweeteners like aspartame and surculose good substitutes?

The obesity epidemic is getting out of control ever since diet foods and beverages gained popularity and the frightening facts certainly make me wonder how foods labeled ‘diet’ or ‘sugar-free’ (containing artificial sweeteners instead) may not be as healthy as so many believe! An American controlled study on 80,000 women showed that those who regularly use artificial sweeteners put on more weight per year than those who don’t use them. Further research conducted at Purdue University shows that a group of test subjects fed artificial sweeteners subsequently consumed three times the calories of those given regular sugar.

Research on artificial sweeteners shows that they affect the same parts of the brain that deal with addiction. Artificial sweeteners are much sweeter than natural sugars, and can actually reset your taste buds. The body then builds up a tolerance, which can cause overuse, another sign of addiction.

There are many reported side effects from regular consumption such as headaches, anxiety, memory loss, abdominal pain, nausea, depression, heart palpitations, irritable bowel syndrome, seizures, neurological disorders, vision problems, brain tumors and weight gain. A concerning find is that the methanol in aspartame is converted into formaldehyde (a cancer-causing chemical) when metabolized.  Makers of aspartame say methanol and its by products are quickly excreted.  But research has found measurable amounts of formaldehyde in the livers, kidneys and brains of test subjects after ingestion of aspartame!

What are some more natural healthy alternatives to cane sugar?

Stevia:  A herb native to South American, stevia is 300 times sweeter than sugar. Stevia has no calories and no glycemic impact making it suitable for diabetics and weight watchers.

Coconut Sugar:  Nutritious and it has a low score on the glycemic index, which means you don’t get such a buzz followed by a crash after consumption. It tastes similar to brown sugar but is slightly richer. You can substitute coconut sugar for traditional sugar pretty much wherever you want.

Honey: Sweeter than sugar, honey that’s been locally produced is the best for you. Packed with vitamins, honey also has antimicrobial properties. It does have more calories than normal sugar but because it’s sweeter you use less of it.

Brown Rice Syrup: Made from boiling brown rice, the syrup is gluten free and has a slightly butterscotch flavour to it.

Maple Syrup: Made from the sap of the sugar maple tree found in North America, maple syrup contains amino acids, proteins, manganese, riboflavin, magnesium, zinc, calcium and potassium. Pure maple syrup is pricey, but you’ll get more nutritional benefit from it than the cheaper ‘maple-flavoured’ toppings, which have both sugar and water added.

We hope you choose to add any extra sweetness to your life the healthy way!