Thy Gout be Gone: The Healing Power of Cherries 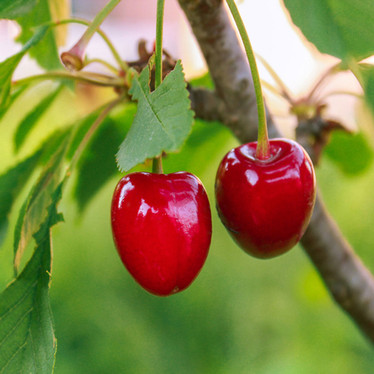 Throughout history gout seemed to be an affliction that affected the wealthy more than their poorer counterparts, as such it came to be known as “the disease of kings” or more poignantly “rich man’s disease”. But in the last hundred years, with ever increasing life spans and changing diets, gout has moved away from this stereotype and now afflicts a much broader spectrum of the human population.

Gout is a very painful form of inflammatory arthritis caused by the crystallisation of uric acid within joints. In just over 50% of all cases of gout, the main joint at the bottom of the big toe is the part of the body that gets afflicted with this acute type of inflammation. But gout can happen in other joints, most commonly the hands, elbows and knees.

The crystallised uric acid gets deposited in the surrounding tissues, tendons and joints of the afflicted area. When treating gout, the main aim is to curb inflammation and lower the concentration of uric acid within the tissues affected.

Enter the Healing Property of Cherries

Tart cherries are full of powerful antioxidants known as anthocyanins, which are coloured compounds that lend cherries their red colour. These anthocyanins have been shown to effectively block pathways involving several key pro-inflammatory compounds in the blood.

Cherries have traditionally been used to promote normal levels of uric acid and alleviate the pain associated with gout. Anecdotal evidence regarding cherries and gout has been around for some time. In the 1950s a physician by the name of Ludwig Blau made the unexpected discovery that cherries could have therapeutic value in gout. A long sufferer himself, Ludwig had noticed that the pain and swelling associated with his gout would significantly subside after he had eaten cherries. When he happened to not eat any cherries at all, the symptoms would reoccur again – leading him to make this anecdotal assumption.

Gout is a serious medical condition, it is persistent and if left untreated the acute symptoms can become chronic. If left untreated over several years, gout can transition from an acute condition to a chronic one, with devastating effects felt throughout the whole body. One of the more nasty effects of chronic gout is the development of microlesions called tophus (or tophi – plural) literally anywhere on the body – from the tips of fingers to the earlobe. Not only are these lesions unpleasant to look at, they are also extremely painful and in the worst case scenario, need to be removed via surgery.

In one large multicentre study of prospectively recruited patients with pre-existing gout, we found that cherry intake was associated with a 35% lower risk of recurrent gout attacks

The first known published study on cherries and gout dates back to 1950 in Texas Reports on Biology and Medicine. Dr. Ludwig W. Blau, the investigator, was himself affected by gout—so much so that he was confined to a wheelchair. After eating cherries, he noticed that his gout pain and swelling were considerably reduced. When he stopped eating cherries, his pain and swelling returned.

In a more recent study published in 2003, it was shown that as little as 45 cherries (equivalent of about 280g) decreased blood uric levels by 14% in nearly 5 hours!! It was also shown that the excretion of uric acid was significantly increased in the same time frame.

In 2008, findings from a retrospective study were released that investigated the association between soft drinks (with high sugar content) and gout. This study indicated a direct correlation between sugary drinks and the development of gout. The other risk factor is volume of alcohol intake.

The reason for this lies twofold, for one, alcohol in the blood, slows down the body’s natural mechanism for uric acid excretion and secondly, it dehydrates the body leading to an increase in crystal formation in the joints. If you are experiencing gout-like symptoms, you should curb alcohol consumption to a bare minimum. Making sure to hydrate whilst drinking (and even when not drinking alcohol) has been shown to reduce the frequency of recurring gout symptoms.

Other risk factors include certain foods known to trigger the crystallisation of uric acid, these include red meat consumption as well aas shellfish and other sea food. Fructose is also known to increase uric acid levels, so try to avoid foods that contain a high amount of fructose (such as dried fruits).

Whilst aiming for a gout-free lifestyle, try to eat plenty of vegetables (especially green leafy types such as spinach and kale), fruits, nuts and eggs. Dairy products are known to decrease uric acid formation, crystallisation and subsequent deposition in joints. Citric acid from fruits such as lemons and limes can lower the uric acid concentration.

A glass of warm lemon juice first thing in the morning before breakfast has the ability to set up the body’s metabolism to optimum levels, as well as fending off gout. So try to make this a routine.

Have you ever tried tart cherry in treating gout? If so, what were the results? Thanks for sharing your experience with us.