Functional Mushrooms: Everything You Want To Know 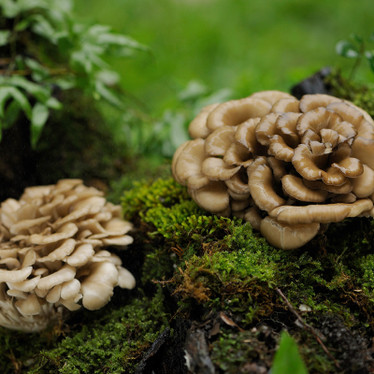 Prized for health support for over 2,000 years in the East, it's relatively recently that we've caught-on to these exotic  mushrooms here in Aotearoa. They're used to support lots of areas like healthy sleep, brain focus, stamina, healthy aging and immune function (just to name a few). And as more research comes out, it's likely the list will continue to grow. Some are delicious and easily added to meals in powders or liquids, while others are slightly bitter and blend well with flavours like coffee or cacao.

Functional Mushrooms have interesting names like Lion’s Mane, Tremella, and Turkey Tail and plenty of visual appeal too - they come in your typical mushroom cap shape, as well as truffles, conks, brackets, and corals – they’re gorgeous!

Functional Mushrooms are generally rich in antioxidants, making them a useful tonic for vitality and healthy aging - on top of all their other remarkable qualities.

Each mushroom yields different compounds, but there are similarities - like beta glucans (healthy immune support) and polysaccharides (prebiotic bowel support) within many of them. When we affectionately call them ‘shrooms’, we’re not meaning their ‘magic mushroom’ psilocybin-containing cousins - but functional mushrooms are no less interesting.

Reishi, Shiitake and Maitake have been on the scene in NZ for a while - they're often found together in immune support blends - they've rightfully earned their place as an 'immune trio'.

The wonder of fungi

Most  Functional Mushrooms are Fungi. Fungi are very complex, far more advanced than plants. One unique characteristic - they digest their food (decomposing wood etc.) outside of their bodies before eating it, they make special compounds to do this - which in part, gives them unique health supporting qualities for us humans.

The mushroom itself is fluffy and white, it really does look like a shaggy lion’s mane. It’s used to support healthy brain tissue – which is key for supporting healthy mood, mental clarity and focus. Following the ‘brain-mane’ theme - Lion’s Mane was used in traditional Chinese practice to support healthy mood and relaxation. Interestingly, it was also used traditionally by Buddhist Monks for focus during meditation.

Lion’s Mane is widely used in cooking in Japan and China - it has a delicate flavour, so Lions Mane powder can easily be sprinkled on desserts, added to baking, or mixed with water to make a mushroom tonic.

The cell health mushroom ( Trametes versicolor), is one of the most well-researched Functional Mushrooms, its special compound, Polysaccharide-K (PSK) supports normal, healthy cell growth and healthy immune balance, especially in the GI tract, breasts, and lungs.

Its name comes from the colour rings that resemble a fanned-out turkey’s tail feathers, it grows on logs and has a leathery texture.

Turkey Tail supports a healthy immune response and recovery from ills and chills, it also has strong antioxidant activity that helps protect against wear and tear from free radicals which makes it great for supporting healthy aging.

The flavour is quite subtle so it can be added to anything like hot drinks, desserts or smoothies without too much need to disguise the taste.

The healthy immune mushroom (Lentinula edodes), Shiitake has been used in China for 2,000 years plus. Compared to other  Functional Mushrooms they’ve got quite a ‘mushroomy’ look and taste, like a rotund, tan version of the button mushrooms we’re used to seeing.

Shiitake is rich in antioxidants and has been shown to support healthy T-cell function. T-cells are an immune cell important for a healthy immune response to ills and chills. Shiitake has a special compound called Lentinan, which is well researched for supporting healthy cell growth and is widely used in Japan.

The flavour of Shiitake is described as rich and ‘meaty’ and they go well with a well salted dish like Miso, which is popular in Japanese cuisine, or make a  mushroom broth.

The energy mushroom (Ophiocordyceps sinensis) is traditionally used to support healthy energy, athletic performance and stamina. They’re brownish-black in colour and about the size and shape of a matchstick.

Like many  Functional Mushrooms, Cordyceps supports a healthy immune system too. Cordycepin is a special compound that has been studied, it supports healthy cell growth. It’s been used in traditional Tibetan practice since the 15th century, for supporting endurance, kidney health and male sexual health. It’s popular today to support male sexual health, including libido and sexual performance.

In the wild,  Cordyceps grow in the body of a caterpillar, but don’t worry, all the Cordyceps that we offer at HealthPost are produced in a growing medium, so no caterpillars were harmed in the making of them - super important because wild Cordyceps are endangered.

They have a mild, nutty flavour, similar to savoury yeast, Cordyceps can be used in the same way to add flavour to savoury meals, try the powder on top of baked or roasted vegetables.

Reishi: for relaxation and good sleep

The rest mushroom -  (Ganoderma lucidum) Reishi is the Japanese name, in China it’s called Ling Zhi. It’s been used in traditional Chinese practice for supporting relaxation and healthy sleep for over 2,000 years, and emerging research is showing promise in this area.

The mushroom itself is red-brown and roundish, with a woody rather than soft texture (easy to remember - Reishi is roundish and for rest).  It has a special compound, Lucidone D (LUC), studies show it has the potential to support healthy and balanced immune function, healthy liver cells for normal detoxification, healthy blood pressure, and healthy blood sugars.

The taste of Reishi is slightly bitter, so it’s usually better in a capsule or combined with other flavours. It makes an ideal pre-bed tonic in a  hot cacao drink.

The all-rounder mushroom - (Grifola frondosa),  Maitake means ‘dancing mushroom’ in Japanese, (people say it’s because people dance with joy if they find it in the wild).

Maitake is a real all-rounder when it comes to health.  It grows in a greyish-tan clump of caps, weighing up to whopping 45kg. Maitake was first used in East Asian traditional practice. It has special compounds called Maitake Mushroom Polysaccharides (MMP) that have been well studied. It has the potential to support healthy blood sugar levels, healthy immune function, and normal, balanced immune pathways. Interestingly one study shows that Maitake supports the body’s natural response to oxidation in skin cells, to support healthy skin aging.

Taste-wise, Maitake is earthy and slightly peppery, people eat them roasted, and they work well with savoury flavours, try adding to soups or stir-fries.

Tremella is a beautiful, snow-white colour with jelly-like fronds, (easy to remember – it's gorgeous and supports gorgeous skin). It does this in two ways. Its antioxidant properties protect from oxidation, the process that causes aging, for a youthful looking complexion. Tremella also supports skin moisture levels, it can hold up to 500 times it’s weight in water because it has a special polysaccharide that retains moisture, similar to hyaluronic acid.

Like other  Functional Mushrooms it supports overall health and immune function too.

Tremella is super popular in Chinese cuisine. Tasting delicious makes it super versatile and it easily mixes into almost anything, baking, desserts, or even in water to make a Tremella tonic.

The healthy gut mushroom - (Inonotus obliquus), originally from Siberia,  Chaga was traditionally used for gut health and recent research suggests that it supports digestive immune health and the body’s natural defences for parasites.

Chaga is woody growth called a ‘conk’, it looks like charcoal, not quite as gorgeous as Tremella, but no less impressive. Like other Functional Mushrooms, Chaga supports a healthy immune response, it also has a very high ORAC rating (Oxygen Radical Absorbance Capacity), meaning it’s a very effective antioxidant. It also has the potential to support healthy blood sugars and pancreas health (the organ in charge of blood sugar levels).

Chaga can take up to 20 years to mature, it's brewed into tea in Siberia. The flavour profile is earthy with a slight bitter finish, so it really suits being added to coffee and Cacao drinks.

Getting mushrooms into your everyday

The possibilities are endless. We love:

...Or, try adding to  baking and desserts, or sprinkle onto a stir fry or any meal for extra nourishment.

Functional Mushrooms during pregnancy and breastfeeding

We recommend people avoid using Functional Mushrooms during pregnancy or breastfeeding. With natural health supplements, it’s best to err on the side of caution, unless it’s been studied, we don’t have sufficient information to say either way.